The sea – powerful and ferocious, able to wreck even the finest ships and rear up to magnificent heights, but also filled with the most astonishing tranquillity and sublime beauty one could possibly wish for.

Over the years many composers have been fascinated with the sea, and many, including Frank Bridge (1879-1941) and Claude Debussy (1862-1918), felt compelled to compose music depicting this natural phenomenon. This short text will deal with Debussy’s interpretation of the sea in his piece, La Mer.

Debussy’s parents wanted him to join the Navy. He himself was transfixed by the sea, and although he never had the opportunity to become a sailor, his childhood memories of holidays to the sea of Cannes were very vivid. 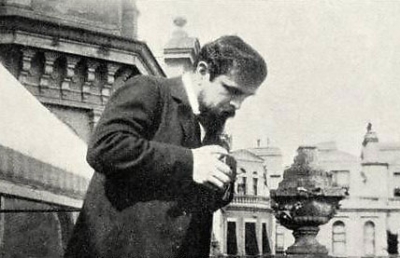 Debussy at Eastbourne where he finished La Mer

La mer, trois esquisses symphoniques pour orchestre was started in France in 1903 but finished in the Grand Hotel Eastbourne on the English coast in 1905. The name ‘symphonic sketches’ came about as a result of Debussy’s firm French nationalism. He disliked how the French national traditions were slowly being influenced by German music. Terms such as ‘symphony’ and ‘symphonic poems’ were emerging in Germany, and in order that people would not think that he was adopting these terms, he dubbed his work ‘symphonic sketches’.

The premiere of the piece was in 1905, Paris, where it was played by the Orchestre Lamoureux. Owing to lack of practice from the orchestra and other various personal circumstances concerning Debussy himself, the work was received poorly, but over the next century it became one of Debussy’s most admired and revered works.

The work is divided into three movements:

Roughly translated, these are:

The original cover for the full score, inspired by the artist Hokusai

In each movement, Debussy paints very different pictures of the sea throughout the day, and the piece moves forward almost chronologically to mimic this, as if the audience is listening to the sea itself.

From dawn to midday on the sea – The piece begins with a soft and gentle tune, and slowly builds up through a crescendo, achieved partially by more instruments of the orchestra joining, to an emotional climax, surging at points, then holding back as the piece moves on, mimicking the awakening of the sea in the morning. Scalic features are used to evoke the waves, and often include whole-tone scales adding to the mysterious power of the sea and the music. Small fragmented motifs bring out the swelling and subsiding of the waves and the muted strings provide a foundation for the music to be explored. The ever-changing time signatures add to the impression of the unpredictable nature of the sea, and the movement comes to a subdued and quiet end.

Play of the Waves – A contrast with the first section, the second movement begins with the upper strings playfully passing around tremolo crotchets. The wind play long, held notes growing in volume only to drop back to piano, giving the opening an air of insistency and expectation. The movement has a lighter, more percussive texture, with the melody continually being passed from one section of the orchestra to the next, never settling. Much of this section is exposed, and requires virtuoso playing and precision from the string and wind players in order for the full effect of the movement to be realised. One way that Debussy creates the image of waves is by the rapid arpeggios, creating peaks and troughs in the pitch. The music dies away, leading into the third movement.

Dialogue between wind and waves – Tremolo from the percussion gives the opening an insistent and urgent feel. The bass and the ‘cellos take up a short, sharp motif, maybe characterising the waves, very dark and violent. They are subsequently joined by the violas, adding to the drama of the moment. This contrasts with a searching, forlorn melody which appears in the wind section, characterising the wind above the sea. A solo trumpet boldly announces a short tune before sinking back into the ever growing texture. Debussy harnesses the full power of the orchestra, gradually growing unto a triumphant conclusion, with the help of the percussion to portray the sea as powerful and majestic.

The Great Wave off the coast at Kanagawa, c1830. From ‘Thirty-six Views of Mount Fuji’ by Hokusai. This inspired the cover of La Mer

This music is typical of Debussy’s writing- a strong sense of atmosphere and mood prevails throughout, but the delivery is subtle, as he paints a picture with a daring and bold palette of impressionistic harmonies and rhythms. The piece’s tonal qualities and interesting orchestration have meant that it has influenced many film scores, delighted many audiences and inspired the next generation of composers, like the sea inspired Debussy.

You can see the score of La Mer at IMSLP.