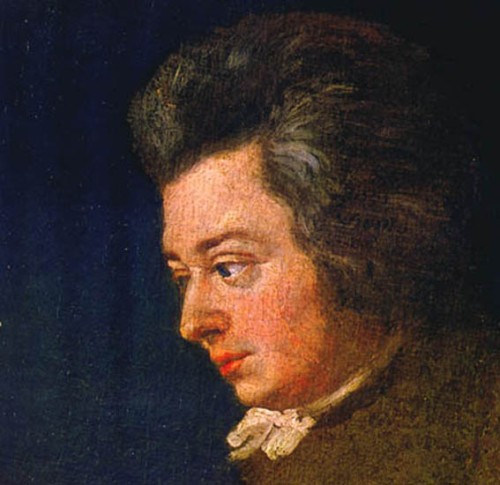 Mozart had been experimenting with the Sinfonia concertante genre whilst on a tour of Europe in 1778 – 1779 and produced three works of the genre: one for oboe, clarinet, horn, bassoon and orchestra, which is of questionable authenticity; one for violin, viola, cello and orchestra, which was abandoned partway through the first movement; and the present work, which is widely considered to be his most effective crossover between symphony and concerto. It is a concerto in that the soloists are prominent throughout the piece, and it is a symphony in that the soloists are nevertheless part of the ensemble as a whole in the conveying of musical ideas. The work is unusual, however, in that the viola section is divided into two like the violins, lending a richer texture to the orchestral sound; furthermore, the viola part was originally written in D major, with the instruction that the viola be tuned a semitone sharp in order to give it a more brilliant sound. Unfortunately, most modern violists would not think of putting such strain on their instruments and simply play the part in E-flat.

The first movement is in sonata form with an introduction and a coda; the orchestra establishes the grand, majestic first subject of the exposition in the introduction. The soloists begin the second subject in unison texture, one octave apart – this unison texture only reappears between the soloists at the beginning of the recapitulation, even though they often play at different intervals elsewhere, lending a magical quality to the return of the second subject. The soloists continue to pass material back and forth, developing it further each time; throughout the movement, rapid, antiphonic semiquaver passages frequently alternate between soloists like dialogue. The development features a brief repose, introducing a mournful, minor melody which is flexible in tempo, contrasting with the bright, major themes of the exposition. The violin precedes the viola in the introduction of new material in the exposition and development, whereas during the recapitulation, which only briefly revisits the first subject, the viola precedes the violin; following the recapitulation is a cadenza shared by the soloists, in which rapid string crossings and double stops are exhibited. The orchestra concludes the movement with a coda which is reminiscent of the end of the introduction.

The Andante movement is in the relative minor, C minor, and begins with the orchestra stating the opening theme, a sorrowful, melancholy melody that is subsequently embellished by the solo violin. The solo viola then begins the same theme, but expands upon it and modulates to the relative major. The soloists then pass the melody back and forth, echoing each other and decorating the melody. We frequently hear the soloists in canon, as well as the violin and viola sections of the orchestra. Mozart also contrasts dense, dark chordal textures from the orchestra with the soloists at higher registers. After arriving back in C minor and reaching a fortissimo climax, the soloists share another cadenza, playing the opening melody in canon, but repeatedly reaching discordant suspensions that are slowly resolved: the cadenza reaches the highest note of the movement before the orchestra quietly echoes a variation of the opening melody, bringing the movement to a close.

The final movement is in sonata rondo form and returns to the original key of E-flat major. The orchestra opens with the first subject of the rondo, a sprightly and energetic melody played by the violin section of the orchestra, followed by the wind. The solo violin introduces the second subject, which is immediately memorable for its brisk ‘scotch snap’ rhythm. When the first subject returns in the rondo/recapitulation, this time played by the soloists, it is in the tonic key; however, the second subject follows in the subdominant via an interrupted cadence, instead of continuing in the tonic as is usual for a movement in sonata form. This allows Mozart to return to the tonic key in the same way as the second subject led into the development, lending a sense of symmetry to the movement. Like the first movement, the order in which the soloists play is reversed in the recapitulation; this is followed by another rondo, which culminates in each soloist soaring to the very top of their instrument’s range (the violin reaches the highest note Mozart ever wrote for the instrument), before the orchestra briefly revisits the rondo, bringing the work to a grand conclusion.