‘I am thrice homeless, as a native of Bohemia in Austria, as an Austrian among Germans, and as a Jew throughout the world. Everywhere an intruder, never welcomed.”

Gustav Mahler was born in 1860, one of 14 children of non-practicing Jewish parents, who ran a tavern in Kaliste, Bohemia. From an early age he displayed precocious natural musical talent, copying folk songs on the piano. As a young child, he would follow the local Regiment of soldiers around, playing his accordion. 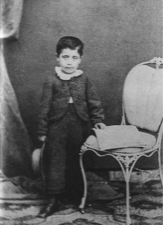 Gustav as a child

His childhood was deeply traumatic. Nine of his siblings died young. As a result, he was painfully aware of death from an early age. His father was violent towards his mother and the other children. Once, when his mother and father were arguing, the young Gustav ran out of the house in tears, only to find a folk band playing jaunty songs. It is said that this contrast so shocked him that the creation of a funeral march from a folk song would come to be a hallmark of his compositions.

At 15, Mahler won a place at the Vienna Conservatory to study piano and composition. He became transfixed by the music and ideas of Richard Wagner. He never met Wagner because he couldn’t afford to see any of his operas. However, he did attend some concerts by Bruckner, who became his mentor, despite being openly anti-Semitic. Wagner did inspire Mahler to become a great conductor, which in this period developed from a simply timekeeping role, to one of interpretation and direction.

Mahler was fascinated by the writings of philosophers such as Goethe and Nietzsche. He also enjoyed German folk stories and used them in his compositions. Des Knaben Wünderhorn (‘The Youth’s Magic Horn’) contains some of the folk-tales that inspired Mahler’s songs as well as themes in his First Symphony.

Mahler became a highly regarded conductor and opera master in Leipzig, and later in Vienna, then the centre of the musical world. Yet it was not until the age of 29 that he finished his first symphony.

This was originally the second movement of Mahler’s first symphony. It was written before the symphony itself and inserted for the first three performances. After the critical setback the work suffered, the ‘Blumine’ (meaning flowers) movement was dropped. It begins and ends with a lyrical cantalina from the trumpet interspersed by haunting melodies from the oboe to create a ‘living picture’ of  ‘lovers exchanging their tender feelings in the stillness of night’ (in the words of a reviewer at the time). Mahler described the piece as a ‘sentimentally impassioned… love episode’. It is hard to tell why it was dropped, perhaps Mahler wanted to conform to the normal, four-movement structure of a symphony. He himself sometimes loved it, and sometimes thought it too sentimental. But even cut, it remains a fantastic piece of music, showing a lighter side of Mahler in contrast with the more serious symphony.

“The kiss” Painted by Gustav Klimt, an artistic associate of Mahler’s

Symphony no.1 by Gustav Mahler

“A symphony must be like the world. It must contain everything. “

Mahler’s first symphony was, for him, a bringing together of all that he had done in his first 29 years. It incorporates material drawn from his earlier work, and a number of motifs from composers who influenced him: for example, the motifs from Liszt’s ‘Dante’ symphony in the fourth movement. It might be considered to be a musical autobiography of his youth, characterized by the juxtaposition of the beauty of nature and the innocence of folk tales with the grim reality of the startling child mortality rate at the time. Unfortunately, his audience didn’t understand what he was trying to say. What really put them off were his programme notes, which suggested some sort of mythical story. Later, however, he changed it to a symphony with no programmatic strings attached and took out the ‘Blumine’ movement, creating a more conventional, and less confusing piece which achieved much greater acclaim.

This movement emerges from silence with a pianissimo sustained A in the strings ranging over seven octaves, the violins using harmonics for the highest registers. Two-note cuckoo-calls in descending fourths and awakening fanfares on clarinets and trumpets create what the first programme notes described as ‘the awakening of nature from a long winter’s sleep’. Perhaps imagine mist creeping over the hills as the first of the sun’s rays begins to appear. Woodwind and brass continue to develop this like a dawn chorus, then a ‘nature theme’ of descending fourths is played:

As nature awakes, we hear a chorale-like theme from the French horns followed by an ominous chromatic ascending sequence from the basses and cellos. There are more cuckoo-calls, this time breaking into a joyous and carefree theme derived from another of Mahler’s works, a song cycle entitled ‘Songs of a Wayfarer’.  Mahler loved country walks, where he could find peace in the serenity of nature. In fact, in later life, he would take to composing inside specially built huts in his favourite spots of natural beauty. Apparently he could often be seen walking to his hut in the morning with two little kittens poking their noses out of his pockets.

Gustav in the mountains

In the development section, Mahler brings the music back to the atmosphere of the beginning. At the close of this section, the ‘inferno theme’ of the last movement appears (more on that later) which drives dissonance into what would otherwise be an idyllic and jovial movement. This is suggestive of Mahler’s internal striving and search for meaning. It also showcases his extraordinary emotional connection to his music, that switches from carefree joy to inconsolable grief in a heartbeat. This evokes Mahler himself, a man dogged by existential fears and racial prejudice from those around him, and haunted by memories of childhood trauma, sibling deaths and domestic violence. In nature, he finds a refuge from his troubles. The ‘wayfarer’ theme returns with brass fanfares adding to a colourful exuberant climax.

This is a minuet and trio movement, although the minuet is replaced by a traditional Austrian folk song called a ‘Ländler’. This movement relates to Mahler’s other refuge, particularly in childhood, of folk stories and songs. These provided a welcome escape from the troubled world around him and influenced his later compositions. This movement also creates a lively atmosphere described at the time as ‘the village pub’, which Mahler, who grew up in one, would have known well. This pub, however, seems to be an idealized place viewed with childlike innocence.

The movement begins with the jolly Ländler, which is repeated in its normal format, then developed into an orchestral style with plenty of brass that builds to a full orchestral finish. Next comes the trio; a more traditional lilting waltz, contrasting nicely with the raucous jollity of the landler. Here we hear a typical romantic waltz in the style of Strauss, who was a contemporary of Mahler. After the trio, the Ländler returns, building as before to a triumphal ending, crowning the first half of the symphony majestically.

The third movement represents all the distress and suffering of the world that grievously affects the Hero, presumably Mahler himself, and his struggles to reconcile pain and suffering with his world-view.

It begins with a funeral march using the tune ‘Brother Martin’ (Frère Jacques) in a minor key as a round. It opens with that rare and magnificent of things, a double bass solo, and then moves through the orchestra in a haphazard manner, using unexpected tone colours, for example the high notes from the double bass. This ironic formation of a funeral march from an otherwise jolly folk song may have shocked Mahler’s audience into starker grief. He magnifies the irony further by following on with an Eastern European ‘Klezmer’ section, with a contraption known as a Mahler machine (a combination of a bass drum and cymbals), and syncopated wind tunes. This parodies the existence of both joy and suffering in the world, and exemplifies Mahler’s struggle to reconcile the two.

After this section, it seems that Mahler will return to the funeral march, but instead he moves on to a lilting elegy comprised of another tune from one of his song cycles, this time for the grief of those close to other people who are suffering. Mahler then goes on to create a fused union of the three themes that travels to a slow mournful ending, with the interval of a fourth that underpins the whole symphony left alone at the end.

This is a woodcut depicting the funeral of a hunter conducted by celebratory animals. Mahler tried to use this in his first programme notes to convey some of what he was trying to achieve. Unfortunately, it only confused the audience because they were expecting happy animals instead of the grisly exploration of suffering that Mahler was trying to convey.

The fourth and final movement exemplifies the clash of the good, represented by ‘paradiso’ themes, and the evil, represented by themes of the ‘inferno’ after the 14th century epic poem by Dante Alighieri. The Hero finds himself beaten down by the ‘inferno’ but in the end the ‘paradiso’ wins out, portraying a victory for good in a world filled with evil and suffering.

It begins immediately after the third movement with a drawn out ‘cry of a deeply wounded heart’ following on from the grief of the previous movement. This ends the focus on the Hero’s emotions for now, and we ‘zoom out’ to the spiritual battle raging around him.

It is into this that Mahler brings the ‘inferno’ (Italian for Hell). It is represented by a motif from Liszt’s Dante Symphony:

In the major key this is used to represent ‘paradiso’ but also, in the minor key, in the ‘inferno’.

Many of Mahler’s contemporary audience would have recognized these themes and understood his design to show the conflict of good and evil.

These are built up to a huge brass climax before morphing into a more lyrical tune without losing any of the ‘inferno’ atmosphere.

A middle section harks back to the earlier ‘inferno’ themes, however, the Hero appears to be followed by the ‘sign of the cross’ theme in the major key. But this is soon replaced by the ‘inferno’ rising once again. However, the ‘victorious’ motif portraying the Hero, returns, this time fortissimo, as if victory is in sight. This marks a daring, abrupt modulation up a tone into D major, of which Mahler said, ‘This passage has no equal”.

The victory motif itself is a modified, victorious version of the nature theme from the first movement.

The passage includes a motif made from the ‘sign of the cross’ added to the ‘Dresden Amen’ used by composers including Mendelssohn and Wagner, who used it to create a decisive effect in Parsifal. This creates a massive fanfare, banishing the inferno and claiming the day for the ‘paradiso’.

After this victory, we are reminded of the first movement, with a short section taken from it, representing and therefore giving honour to the Hero’s childhood, reminding us of the awakening of nature and of all that is alive and good.

The last section creates a magnificent finale out of the ‘paradise’ themes, combined with a few quiet echoes of an ‘inferno’ left far behind, building to a magnificent, triumphal end to this spectacular work.