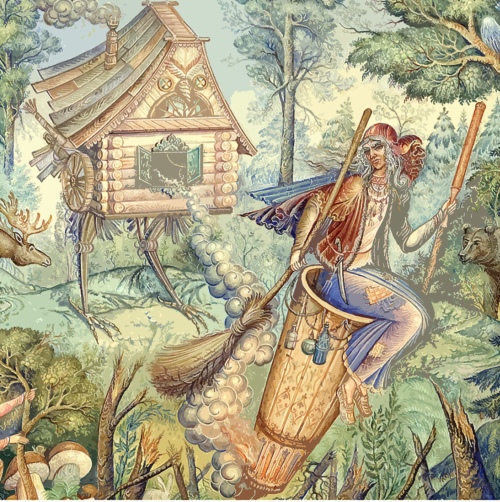 This is an old Russian folk tale about a terrifying witch, who flies in a pestle and mortar and lives in a creepy house on chicken’s legs.

Vasilisa lives with a wicked stepmother and step-sisters. She is sent to the witch Baba Yaga’s house for a light, when their oven goes out.

When she gets to Baba Yaga’s house, the witch says she must earn a fire by doing things for the witch. Really, Baba Yaga hopes Vasilisa will fail to do the chores so she has an excuse to eat her up! So, the witch deliberately gives Vasilisa impossible things. First, she must weave a cloth of sliver; then a cloth of gold; lastly a blue cloth of diamonds like stars.

But Valisilsa has an enchanted doll that once belonged to her mother. Whenever she feeds the doll, it speaks. The doll tells her to give gifts of food to the magical heroes on horses. Valsilsa does this, and each man gives her a gift in return: first silver from the morning, gold from the evening, and with diamonds from night. She has all the materials she needs for her weaving.

The witch is amazed that Vasilisa has completed all the tasks, and gives her the magic light she needs for her wicked step-family.

Vasilisa returns home, and the magic light burns the house to the ground and her wicked step family with it.

Vasilisa seeks a new life in the great city. There she weaves such beautiful cloth, that the Tsar asks for a shirt made of it. He is so impressed with her weaving, that takes her as his wife.

This music is by a Russian composer called Modest Mussorgsky. It is part of a longer work called “Pictures at an Exhibition”, for piano, which was inspired by the pictures of an artist called Victor Hartmann. A French composer, Maurice Ravel, arranged it for orchestra. We hear the House on Chicken’s Legs stamping, and perhaps imagine Baba Yaga pounding through the sky in her Pestle and Mortar. At last Baba Yaga flies through the gate of a city called Kiev, where the bells are all ringing for the Tsar who lives there and who will one day marry the heroine of the story, Vasilisa.

The Hut on Chickens Legs/Great Gate of Kiev: