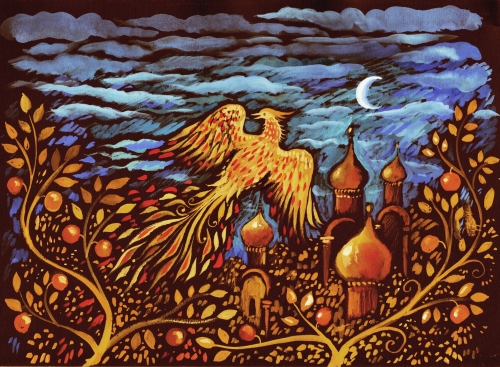 Prince Ivan is on a quest to find the legendary Firebird, at the request of his father. His travels lead him to the enchanted garden of the wizard, Kaschei. There he sees the magical bird feeding on golden apples. He attempts to capture her, but she begs to be set free in return for a golden feather. Ivan agrees, and keeps the feather in his hat.

Before he can leave Kaschei’s realm, he sees 13 captive princesses. One of them is the beautiful Helena, Princess of Inexhaustible Loveliness. She tells him that he is in great danger: should the wizard find him, he would turn Ivan to stone!

Ivan is already in love with the princess and determined to rescue the her; but the wizard and his servants capture Ivan, and tie him up. The wizard Kaschei attempts to cast a spell, but Ivan uses the golden feather to summon the Firebird. The Firebird enchants everyone with a song, which sends all but Ivan into a deep sleep. She then guides Ivan to a golden apple tree, where, in the roots, is hidden the egg containing the wizard’s magic.

Ivan smashes the egg, and Kaschei’s evil kingdom is destroyed. Thanks to the Firebird, the wizard is vanquished, and Ivan and the Princess return to his kingdom to live happily in splendour!