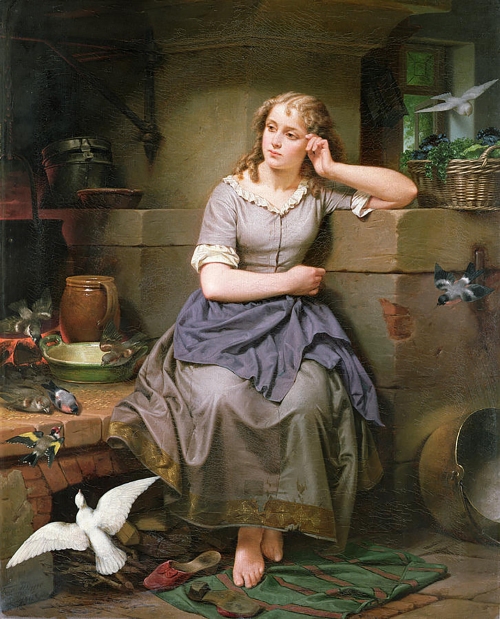 Lots of composers have used the story of Cinderella in their music, and the story is told all over the world.

Cinderella lives with her two horrid step-sisters and step-mother. They expect Cinderella to do all the work, and make her sleep in the cinders of the fireplace.

When they are invited to the Prince’s ball, Cinderella is left behind to do all the chores. But her fairy godmother appears and says she will help her go to the ball using magic – as long as she is home by midnight, when the spell stops working.

Cinderella is the most beautiful girl at the ball and dances with the prince. But when midnight strikes, she runs away, losing a slipper.

The prince has fallen in love this mysterious girl, and searches until he finds the foot that fits the slipper – Cinderella’s of course!

The Russian composer Sergei Prokofiev wrote a ballet of the story. In his story, Cinderella arrives at the ball, after being escorted by dancing stars!

Here is the waltz from the ball scene, ending with the clock striking midnight:

Gioacchino Rossini wrote an opera called “La Cenerentola” which is based on an Italian version, and the story is a little different from the story most of us know.

When the prince announces a ball to find a bride, he changes clothes with her servant Dandini. Everyone thinks Dandini is the prince and that the prince is the servant!

Of course, the ugly step-sisters flirt with Dandini at the ball, while Cinderella falls in love with the “servant”and she gives him a bracelet, telling him to bring it back to her.

The next day, the prince finds Cinderella. He explains that he swapped clothes because he wanted someone to love him for who he was, not because he was a prince.

Rossini also called his opera “The Triumph of Goodness”, and it’s really about being beautiful on the inside, not just on the outside.

This is the overture, a piece played before the story begins. It starts quite serious… but then sounds magical and full of fun, which is right, because the opera story is played as a kind of comedy:

And here is Cinderella’s happy ending. Listen to how the music gets faster and faster, and sounds almost like laughter: