Players from the CBSO record the Fifths’ string quartets. 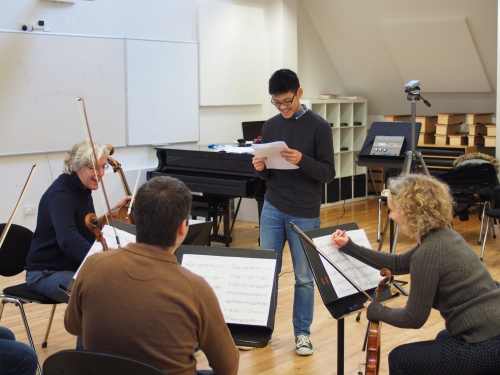 There was a cold snap to the air that brisk Sunday morning as ten drowsy boys trudged into school from each corner of Birmingham, the sound of their alarms still piercing their skulls. You ask; why were they in school on a Sunday? What could have possibly coerced them into doing such a thing? These are both valid albeit contrived questions as there are very few circumstances which involve lazy adolescents leaving the house on what is, after all, a day of rest.

However, this particular morning elicited no such signs of reluctance, as each and every member of the group had arrived to realise their true calling – to spread the sweet, dulcet tones of serial music, which in case you don’t know, is music that is designed to, well, sound bad…

Hmm, perhaps I should explain this in a little more detail.

‘Serial music is that which does not follow a scale or conventional harmony. Rather, it is a combination of different primes, retrogrades, inversion and retrograde-inversions of a chosen line of dissonant notes. I know right.’

Okay, okay. So maybe these school boys were initially somewhat sceptical about composition in such a genre. After all, they had never before listened to let alone composed serial music of any description, and although I would like to say that these minute reservations had vanished once the creative juices started flowing, the truth is that they stuck around until today when the nervous pupils found themselves holding their pristine scores with trepidation.

The author looks on, a picture of trepidation.

Perhaps part of this apprehension stemmed not only from the fact that these performances counted towards the final GCSE grade, but also from the weight of the occasion; alas, if seeing Dr. Leigh with his top two, yes two, buttons undone was not already enough make these boys uneasy, then they were in for a treat as today, playing their serial compositions, was the highly esteemed string quartet form none other than the City of Birmingham Symphony Orchestra! *Cue fanfare*.

The ensemble was comprised of the revered likes of Lena Zeliszwska at first violin, Zhiko Georgiev at second violin, Mike Jenkinson on the viola and Richard Jenkinson on the cello. We were spoiled with their prowess, which made proceedings run smoothly even when some of the students’ limited knowledge of dynamics became blindingly obvious *cough, cough*. 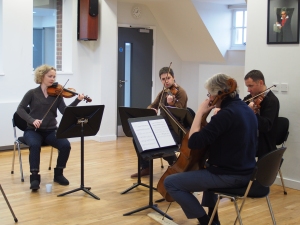 As we progressed through pieces such as ‘Shi No Numa’, ‘Seriaously Bad’ and ‘Why?’ the general consensus amongst the composers began to change from “Grrr, Sunday” to one of a much more positive nature; it was as if real-life string instruments didn’t sound like saxophones as they did on Sibelius; as if this wasn’t all part of one of Dr Leigh’s evil plots! By the end of the session, we’d had great fun listening to some exquisite pieces, played in a manner both unforgettable and professional, and all in time for Sunday lunch.